Rebellion, peer pressure, and experimenting are trademarks of being a teenager. And despite talking about the dangers of drugs and alcohol, teens sometimes use them. As a parent, this can be frightening. But there is help out there for adolescent addiction. Knowing the signs of addiction in teens is crucial to getting your child help.

How Drugs and Alcohol Affect Adolescents

The teenage and adolescent years are full of physical, emotional, and behavioral changes. As teens reach maturity and their brains and bodies change, they start trying new things. Sometimes, experimenting with drugs and alcohol is part of the journey.

The Monitoring the Future survey is given to eighth, 10th, and 12th-grade students every year. This survey asks about substance use and their feelings about drug abuse. 2021 saw the most significant decrease in one year since 1975.

The most significant decline was in alcohol, marijuana, and vaped nicotine. This decline came after a sharp increase in vaping nicotine and marijuana in 2017 and 2019. However, there was a rise in teens feeling anxious, depressed, lonely, and bored which are risks for using drugs or alcohol.

Brain and Body Development in Teens 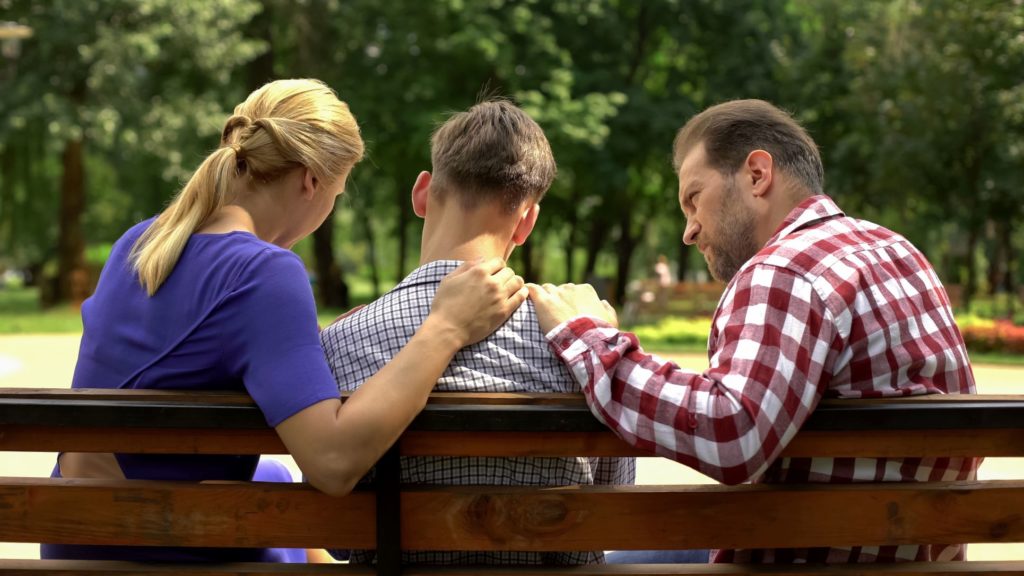 Research shows a person doesn’t reach full maturity until the mid-20s. However, 18-year-olds are considered legal adults. Unfortunately, at this age, the areas of the brain that make decisions, solve problems, and control behaviors are making the most significant changes.

Teens are more likely to take dangerous risks. This includes behaviors like drinking alcohol, using drugs, and even driving while intoxicated. No wonder there is a big jump in death rates between early and late adolescence.

The teen years are loaded with hormonal changes, the desire to be cool and fit in, and peer pressure. If a group of teens is drinking or doing drugs, peer pressure can cause other teens to join in. Since the brain and body are still developing, substance use can affect development.

Research on brain development shows the adolescent and teen brain is susceptible to the effects of drug use. This means they are highly vulnerable to developing an addiction or substance use disorder.

Age is an important factor in the likelihood of developing a substance use disorder (SUD). The sedative effects of alcohol and some drugs affect teens less than adults. This lowered sensitivity increases the risk of overdose and even death.

Heavy and frequent drug use inhibits the brain from developing fatty tissue around the brain cells. This fatty tissue helps with nervous system function and comprehending and retaining information. Whether a teen uses drugs for a short time or long term, it can cause damage to the brain.

Drugs affect brain development in teens because they:

It is easier for teens to get marijuana and prescription pills than it was for their parents. So, it is essential to talk with your teen, know their friends, and watch for changes in their behaviors. If you suspect your teen is using drugs, it is important to seek teen addiction help.

Alcohol Harms the Liver and Brain

Short-term alcohol use produces feelings of relaxation and lowers inhibitions in teens. Their brain activity slows, and the euphoric feelings can be addictive. The long-term effects of alcohol can be detrimental to the adolescent brain.

Long-term effects of alcohol include:

Underage drinking can have tragic consequences. According to the U.S. Department of Health and Human Services, about 5000 young adults die yearly from underage drinking. This includes:

Other deaths occur from falls, burns, and drownings. Despite the consequences, teens still drink alcohol. This is because the part of the brain that connects short-term actions with long-term consequences isn’t fully developed.

Which Drugs Are Most Frequently Used by Teens?

It’s great that substance use is declining in eighth, 10th, and 12th graders, according to the Monitoring the Future survey. However, teens are still using drugs and alcohol, with some being more popular than others.

Teens use alcohol the most often. In fact, more than one in three 12th graders report getting drunk at least once. They also report using the following substances at least once in the past year:

Of all amphetamines used, Adderall is most often used by 12th graders, with 7.4 percent using it in the past year. The most used prescription painkillers are Oxycontin at 3.6 percent and Vicodin at 5.3 percent.

Signs of Drug and Alcohol Use

As a parent, you probably know your child better than anyone else. You have watched their personalities and behaviors change; some are not so good. But various behavior and psychological signs may indicate drug or alcohol use or addiction in teens.

Physical signs of substance use and addiction in teens:

Behavioral signs of substance use and addiction in teens:

Teens often exhibit these signs regardless of drug use. As a result, it can be hard to know when to seek teen addiction help. If your teen is showing severe versions of these signs, it is crucial to sit and have a calm conversation about your suspicions.

How to Talk to Your Child About Drug Use

Although drug and alcohol use is declining in teens, studies show parents can further reduce the chance their teen uses drugs or alcohol by having honest and open discussions. If you are unsure how to talk to your kids about drugs and alcohol, you should contact a professional in teen addiction help.

Every child and teen is different and experiences different things. For some kids, having “the talk” about drugs and alcohol needs to happen sooner than for other kids. Some parents never have “the talk,” while others start talking about the dangers of drugs when their kids are small.

If you are like many parents and wonder when the right age is to have “the talk,” experts say that between the ages of eight and ten is a good time to start. While you can wait longer, you should know most kids interact with people who use drugs and alcohol by age 11.

Additionally, 62 percent of teens admit they had their first full drink by age 15. Talking openly with your child can give them the tools to make smart decisions and avoid dangerous situations.

When talking to your teen about drugs and alcohol, you should:

Finding Help for Addiction in Teens 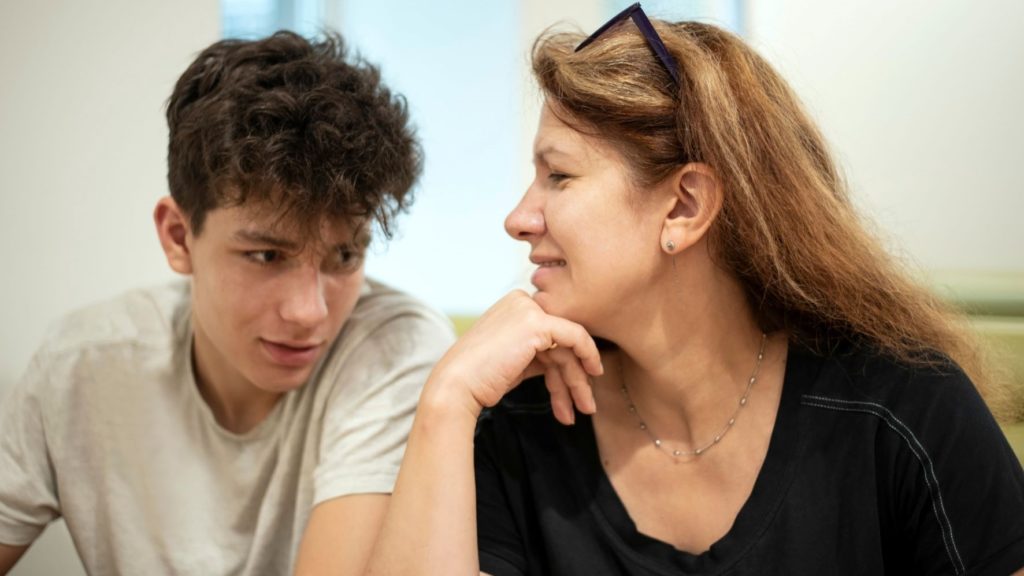 It is so important to have regular check-ins and conversations with your teen. If it appears your teen is under the influence at any time, it is crucial to seek teen addiction help. The sooner you get help, the quicker your child returns to a healthy lifestyle.

Your family physician can help you find a licensed counselor trained in addiction in teens. Along with helping find a counselor, a physician can test for drug use and do a physical and psychological exam. These tests can determine the severity of use and how much damage has been done.

You may learn your teen has experimented with drugs or alcohol, and they may benefit from psychotherapy. But, if your teen is more than experimenting, binge drinking, or struggling with addiction, it’s time to seek addiction help for teens.

According to the Substance Abuse and Mental Health Services Administration (SAMHSA), more than one in five parents believe they have little influence on their teen’s substance use. However, teen surveys show parents greatly impact teen drug use and addiction.

A parent’s relationship with their child and teen is key to preventing them from making unhealthy life-altering decisions. These seven tips can help all parents minimize the risk of addiction in teens.

As kids get older their friend group grows. It can be challenging to know all their friends, but it is important to know who is influencing them. Making sure their friends are positive influences means your teen is likely to make good choices.

Be a Good Model and Influence

Teens are fragile and discovering who they are. Creating a positive home environment builds self-esteem and confidence. This helps them make the right choices, encourages them to relax, and allows them to be themselves.

Talk to Your Teen Early

Do not wait until you suspect your teen is using drugs or alcohol. These substances can make changes to your teen’s brain with even one use, not to mention the damage from continued use. Seeking teen addiction help can reverse or stop further damage.

Talk about peer pressure and how it can negatively affect your teens’ life. Help them understand how to identify and deal with these influences. While their choice may not be “cool.” it will prevent making bad and potentially dangerous decisions.

Keep an Eye on Your Teen

How LUNA Can Help You Recover

If you suspect your teen is using drugs or alcohol, it’s time to seek teen addiction help. At LUNA Recovery Center, we offer programs designed to help teens find lasting recovery. Contact us today to find out more.